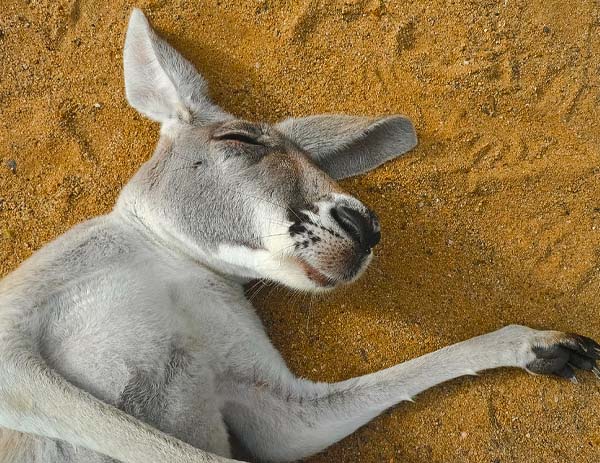 How Do Kangaroos Sleep

Kangaroos are pretty common in the outback, but did you know kangaroos actually sleep? Below we tell you and go over some more Roo facts!‍

How do kangaroos sleep? The same way humans do! Usually, they will find a shady spot and lie down on the ground. You can see them lying on their side or back, sometimes even using their limbs to keep their heads up.

Where Do Kangaroos Sleep?

Kangaroos sleep on the ground, but these animals are cautious and sleep away from predators like humans so catching a glimpse of a kangaroo sleeping in the wild is not as easy as you would imagine.

Some kangaroos are solitary, while others live in groups called a mob or a herd.

How Often Does A Kangaroo Sleep?

This is a difficult question to answer. Kangaroos do not sleep the same as humans, and they laze around during the day in shady places to avoid the sun's heat.

What is known is that Kangaroos like a bit of comfort, and they scratch away at the ground to make a place to rest and sleep.

It is only natural that a kangaroo would not go into a deep sleep. This would be dangerous, particularly for a solitary Kangaroo.

Kangaroos are mainly nocturnal and spend time grazing on grass, their diet is similar to a cow, and they ruminate like cows!

Kangaroos don’t have very many predators; depending on the species of kangaroo, they can be large and powerful.

However, Dingos are a problem for the Kangaroo. Dingoes hunt in packs and cross large planes, searching for food. An unsuspecting Kangaroo can find itself in real danger when confronted with Dingos.

Kangaroos are not keen on dogs’ full stop. Fox is another predator that will attack and try to subdue a kangaroo.

Unfortunately for the Kangaroo, farmers are the primary predators and have no qualms about shooting or poisoning Kangaroos grazing on their land.

Also, Kangaroos have been used as a source of meat for many generations of indigenous people. Still, the populations are robust, so the kangaroos shouldn’t become extinct at any time soon.

The excellent news is Kangaroos can have a massive 16 feet leap, so catching a kangaroo can be an enormous challenge for predators.

Most folks don’t realise Kangaroos are excellent swimmers and will find water to escape from a predator.

Kangaroos are timid creatures and prefer not to have any contact with humans. However, when attacked, the first option is to leap away to avoid the predator. If they can’t get away, the Kangaroo will stand its ground and fight.

For a predator, the Kangaroo can be a formidable opponent. The Kangaroo’s powerful hind legs are equipped with robust claws combined with a muscular tail, and the kangaroo can balance and strike out with both hind legs together.