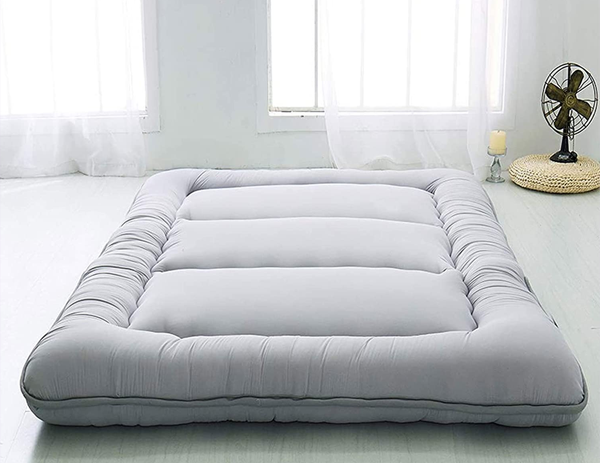 Futons are a popular choice of furniture for many homes. Not to mention, they're mighty comfortable too!

One of the best things about a futon is that it can turn into a bed and provide people with a comfortable place to crash whenever they wish to lie down. Plus, it goes well with most residential spaces - from apartments to big mansions.

However, if you wish to get the maximum comfort out of your futon, it's imperative to select the right mattress size for it. This is why we've prepared this guide on the various futon mattress sizes that are available!

So, without further ado, let's dive in!

How Big Is A Futon?

There is, unfortunately, no direct answer to this question since the size of a futon depends on several factors. Firstly, one has to consider the sizes of standard mattresses since they influence the size of the futon once folded open.

Thereafter, one has to discern what type of futon is being talked about. The concept of a futon originated in Japan; however, it has since then travelled south and found a home in Australia. But then, the Japanese and the Western futon aren't the same; there are noticeable differences between them.

Even though the shape and overall look of the futon have evolved, there has thankfully been no change in the size of the futon mattress. The only limitation with respect to mattress sizes is that you won't have much choice available for some of the XL variants, which are significantly less popular.

Some of the main futon mattress sizes are:

These types of futon mattresses are the cheapest since they're the smallest in size. If you sleep alone, aren't active through the night, and wish to conserve space in your bedroom or apartment, then this is the best choice. It can even fit snugly into a cramped dorm room!

When it comes to Twin XL size mattresses, they have the same width as that of their Twin counterpart, but they're 5 inches longer.

If you are a single sleeper but are fairly active through the night or toss about a bit, then this mattress size is the one for you. It's a little roomier than the Twin size mattress and is commonly referred to as a Double.

Full XL size mattresses again have the same width as that of a Full but are 5 inches longer.

If you and your partner want a lot of space while sleeping, then the King size futon mattress is a stellar option. It is also suitable for those who move around a lot in their sleep.

So, if you're a light sleeper but your partner tends to turn and toss at night, we recommend getting the King futon mattress. You can easily scooch over to one side and sleep uninterrupted.

Difference Between Japanese And Western Futons

A typical western futon consists of a slatted sofa (made of wood) that can easily transform into a bed. However, it's a far cry from what the traditional Japanese futon used to be.

Houses in Japan used to be on the smaller side, and as a result, space was tight. So, the Japanese futons were essentially beds that were folded up and put away once daylight came around. Now, a traditional Japanese futon has three parts, which are:

i. "Shikibuton", or the mattress

ii. “Kakebuton”, or the duvet

iii. "Makura", or the Pillow

To sum up, the Japanese idea of a futon is essentially lying down on the floor, with the shikibuton or thin mattress as padding for the body. This type of mattress is also available in single, double, queen and king sizes, ranging between 35” x 78” and 70” x 78” (approx), with a thickness of around 3 to 4.5 inches.

Western futons usually consist of a mattress having a low base made of wood. They are unlike their Japanese counterparts, are much thicker, and thus, cannot be folded. Plus, as talked about earlier, they're available in twin, full, queen and king sizes.

Another noteworthy aspect about Western futons is that many of them come with armrests, which also contribute to the width of the futon.

But since there is no fixed rule regarding this, read the description of the mattress carefully to see if the manufacturer has mentioned this fact. If the answer is a no, then you'll need to add 6-8 inches of space or "wiggle room" in case you're looking to tuck the futon away in a cramped corner.

If you're someone who is running low on space in their living area, then a futon is just the thing for you. Both Japanese and Western futons are incredible space savers, so you'll do well with choosing either type.

With this, we've reached the end of our guide, and we hope we were able to give you more clarity on futon mattress sizes. Until next time!

Read next: Best futons in Australia.