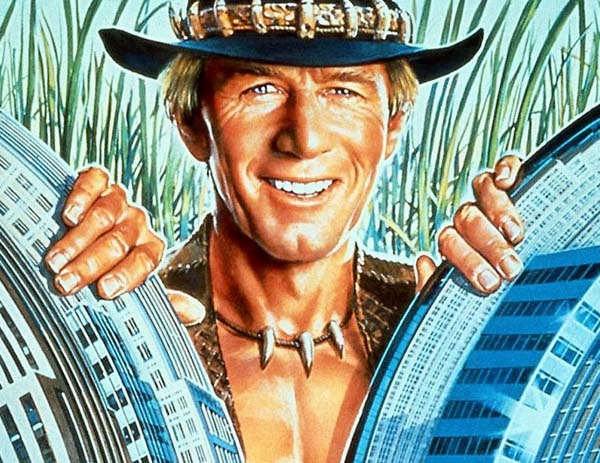 There is nothing better than winding down with some good ol’ Aussie movies after a long day at work.

But, more often than not, we find ourselves flipping through the channels or endlessly scrolling through Netflix until it is past bedtime. Fortunately, that won’t be the case anymore.

Indeed, we have curated the best Australian movies that are most enjoyable to watch from the comforts of your bed.

These include lesser-known gems that have received critical acclaim at international film festivals, and classics that are just as entertaining after multiple watches. And, whether you are looking for light-hearted romantic comedies or horror movies that will make the hair on the back of your neck stand up, we’ve got you covered.

So, go ahead and take a sneak-peek at our top 13 picks before you get under the covers tonight for that well-deserved movie-time.

Michael J. “Crocodile” Dundee is a living legend who captures a bushman’s toughness and manliness in this epic action-comedy film. World-renowned for surviving a crocodile attack, his survival skills are only really tested when he is invited to New York by the American reporter Sue Charlton.

A significant change from the Australian Outback, the move brought plenty of opportunities for humorous dialogues and incidents. And while on the surface, Crocodile Dundee may be about a funny Aussie bloke, the movie was able to showcase the beauty of the Northern Territory and rural Australia.

Considered one of the best Aussie movies of all time, Crocodile Dundee became an instant hit film worldwide — and the most commercially successful Australian film ever. So much so that Paul Hogan, who played the titular character, reprised his role in the sequel, Crocodile Dundee 2, and the third instalment, Crocodile Dundee in Los Angeles.

Needless to say, this movie and the entire franchise is a must-watch for the scenic shots and a good laugh before bed.

Australia is set during the Second World War and stars homegrown Hollywood megastars, Nicole Kidman and Hugh Jackman. This high-budget three-hour-long film serves a hint of romance, some kangaroos, and a lot of Australian history.

Not to mention the stunning imagery and meaningful storyline throughout the runtime. It doesn’t come as a surprise that it is one of the highest-grossing films ever, and a movie that we recommend to everyone before a good night’s sleep.

Action buffs and gaming enthusiasts are not the only ones who can delight in this star-studded, action-packed film. Aside from the breathtaking car scenes and a stellar performance from young Mel Gibson, the underlying themes regarding human consumption in Mad Max may give you something to think about.

And while the film may sometimes paint a grim picture, the thrill of sweet revenge as the titular character goes on a rampage may lead to sweet dreams.

Animal Kingdom is a thrilling crime film about a Melbourne criminal family. While it isn’t based on a true story, the film has some connection to real-life events that unfolded in the ’80s and ’90s.

Crime drama buffs may be familiar with the various tropes utilised by the director and screenwriters, but the story and spectacular performances set this film apart. In fact, Jacki Weaver was nominated for an Academy Award for her supporting role as the formidable matriarch.

And if you can’t get enough of the gripping thriller, you can binge-watch the TV series with the same name.

A film based on true murder cases in the Australian Outback, Wolf Creek is a genuinely terrifying watch that has become one of Australia’s most memorable horror films. Apart from the story that borrows elements from real life, Mick Taylor, the film’s sadistic serial killer, was inspired by actual characters.

On that note, watching this film a night before a backpacking trip may not be in your best interest. Or perhaps, it may add a hint of excitement to your adventure.

High school can be a horrifying time for many of us — but not as much as this gruesome film, we hope. Like many teen flicks, The Loved Ones starts with a teenage girl who has yet to find a date for prom.

However, nightmares ensue when her prime pick turns down her advances. It soon becomes apparent that the teenager cannot take no for an answer and will go to any lengths to go to her dream prom.

Baz Luhrmann, considered one of the best filmmakers in Australian cinema, made his feature directorial debut with this quick-paced rom-com. As the name suggests, this one is a must-watch for the riveting dance sequences and musical numbers.

At the same time, Strictly Ballroom does not deviate much from the overused dance-centred romance genre. However, it adds a dash of humour and endearing characters, making it a strictly fun watch.

Like comfort food, this is a comfort film for nights when you want to plop down and relax.

Most movie buffs may be aware that the 1999 cult classic 10 Things I Hate About You brought Heath Ledger international success. However, the talented actor had already shown promise and versatility by starring in the Australian crime thriller, Two Hands, that same year.

Apart from the lead actor’s endearing and clueless personality, Two Hands is about a set of bizarre characters. They all come together to add a touch of humour to this crime film, essentially turning it into a black comedy.

Known today as the “Stolen Generations,” aborigines of mixed race were once torn away from their mothers and trained in schools for domestic and factory work. Rabbit-Proof Fence explores the lives of three such aborigine children in this gut-wrenching and emotional drama.

And it is indeed based on actual policies that the Australian government enforced until 1970. In fact, the award-winning screenplay by Christine Olsen takes inspiration from a book by Doris Pilkington, in which she narrates events from her mother’s own life.

This heartbreaking tale and sharp critique of society won Phillip Noyce many nominations and awards for the Best Director.

This roaringly comic film follows the hilarious journey of two drag queens, portrayed by Guy Pearce and Hugo Weaving, along with a transgender woman, played by Terence Stamp. Traversing across the Australian Outback in the desert van, christened as “Priscilla, Queen of the Desert,” the trio meets various characters on the way.

Of course, only some were more accepting of their lifestyles than others. With these plot lines, the film explores LGBTQ themes in a heartwarming fashion and with plenty of costumes that will dazzle you.

An aborigine-made movie about two teenage aborigine lovers, Samson And Delilah, pulls at your heartstrings. And yet, the story is much more than just a tale of two lovers — it delves deeper into the treatment of the natives at the hands of the White man.

The film was shortlisted for the Best Foreign Language Film at the 82nd Academy Awards and bagged the Caméra d’Or at the prestigious Cannes Film Festival.

Drama and fantasy — these are the essence of this pop culture phenomenon that has taken over the world. While Moulin Rouge is set in the glitzy and glamorous Paris of the 1890s, the film was shot on Australian sound stages.

Directed by one of the most celebrated Australian filmmakers, Baz Luhrmann, the film follows the tale of Satine, a dancer girl with a dark secret. On that note, this visual treat brings an electrifying and dramatic experience you can only expect from a director with a background in opera.

Michael Caton plays a terminally ill taxi driver who is on his way to end life on his own terms — at a euthanasia clinic in Darwin. Many viewers are torn at the fate and ending bestowed upon them by the filmmaker, which is the brilliance of Last Cab To Darwin.

Anyhow, this film beautifully captures the visceral parts of the terrain and landscape, as any good Australian movie does.

The Hemsworth brothers, Cate Blanchett, Russell Crowe, Nicole Kidman, Heath Ledger, Hugo Weaving, Hugh Jackman — Australian cinema has nurtured all these world-class stars. And while these international actors are now more known for their Hollywood blockbusters, they provide a glimpse of the wealth of talent at home.

That said, there are plenty of genres for you to choose from — and perhaps, a dozen masterpieces in each. We have only listed a few of these for all your sleepless nights or nights when you want to relax and unwind.

So, whether you are looking for a thoughtful or frivolous flick, pick one from our list, lie back on your bed, turn down the lights, and enjoy.